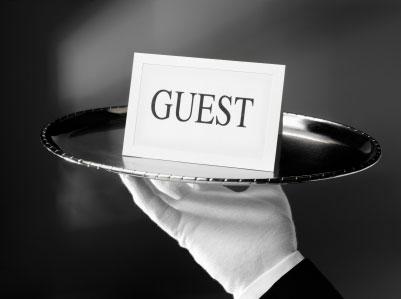 The Sunnah of entertaining the guest

The Sunnah of entertaining the guest

‘Whosoever believes in Allah and the Last Day should honour his guest.’

Another version of this Hadith states:

‘Hospitality is [very recommended] for three days. Whatever is beyond that is sadaqah [charity].’

Hosting and entertaining guests is indeed a significant deed in Islam. The first man to entertain a guest was Nabi Ibrahim (‘alayhis salam).

This quality is directly linked to the level of one’s Iman.

As seen in the above narration, Rasulullah (sallallahu ‘alayhi wasallam) coupled honouring the guest with Belief in Allah and the Day of Qiyamah, which are two fundamental aspects of our Din.

In the days gone by, a guest was seen as a bounty for which the host was ever grateful. This is a sign of the level of Iman of such hosts. [See one example here]

Some Hadiths explain that a guest actually arrives with his own sustenance from Allah, and when he departs, he is a means of the sins of the host departing too.

Let us all revive this spirit of the Sunnah of welcoming and honouring guests, without exception.