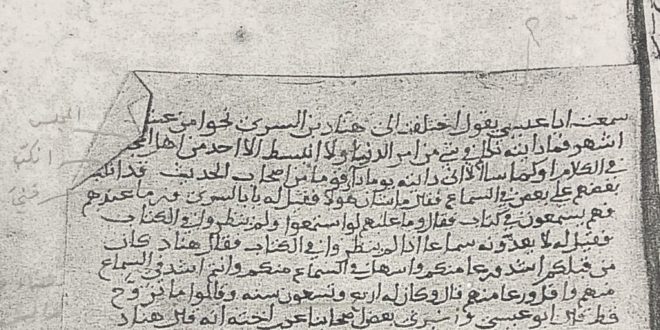 The following is a passage I recently came across in a manuscript of Sunan Tirmidhi. This manuscript dates back to the year 558 A.H.

In this passage, the student of Imam Tirmidhi (rahimahullah) relates from Imam Tirmidhi himself some interesting information about one of Imam Tirmidhi’s favourite teachers; Imam Hannad ibn Sariy, who was also the teacher of all the other authors of the six famous Hadith books (the sihah sittah). He was also well respected by even his own teachers. (namely Imam Waki’).

Imam Tirmidhi met the Shaykh towards the latter part of the Shaykh’s life (he lived till over 90!) and attended his lessons for ten months.

He later reported from him the forth most Hadiths in his book; Sunan Tirmidhi. May Allah be pleased with them all.

I heard Abu ʿIsa (Imam Tirmidhi) say that I frequently visited Hannad ibn Sariy for about ten months. I never saw Hannad speak about any worldly matter nor speak freely/casually with anyone….[?]

However, I saw him on one occasion commenting about a group of students of Hadith, who were crowded over each other whilst in the lesson. When Hannad enquired: “What is the matter with them?” Someone replied: “Oh Abu Sariy, that which they had is now gone [they do not have sufficient copies of the book they were studying/acquiring], therefore they are sharing a book in the lesson (fis sama’). Hannad replied, “Why don’t they just listen and not look into the book? The reply was: “They do not consider it to be legitimate, if they do not look into the book itself [while hearing the Hadiths]. Hannad then said, “Those before you had more piety than you, but they were more lenient regarding the conditions of sama’ (acquisition). You lot are stricter on the conditions of sama’ (acquisition) but less pious than them!”

He (Imam Tirmidhi) said, “He was ninety-four years old, and they said he never married.

Abu ʿIsa (Imam Tirmidhi) said: “Some of my companions have informed me that Hannad’s nephew said: ‘Hannad completed the entire Quran every day for the past seventy years. Moreover, he would fast consecutively, and his place of worship was the Masjid.’

See the PDF of the passage here

May Allah Ta’ala fill his grave with mercy.

Imam Hannad (rahimahullah) was well known for his ‘ibadah, and was labelled: The greatest worshipper of Kufah’ (راهب الكوفة).

Refer to Siyar A’lamin Nubala, vol.11 pg.465 for more on his biography.

It should be noted that I haven’t seen the above passage in the available books that have the biography of Imam Hannad (rahimahullah) – which makes it more valuable.

Upon seeing this passage in the manuscript, My Honourable Teacher; Al-‘Allamatul Muhaddith, Shaykh Muhammad ‘Awwamah (hafizahullah) commented: ‘This is a rare find which should be cherished.’

Lessons to be derived from the above

The following are among the many lessons to be derived from the above passage:

1. Imam Tirmidhi spent ten months in the company of this Shaykh (rahimahumallah). Ten months of the life of a senior at that ripe age is invaluable. This coupled with the retentive capacity of a master-student like Imam Tirmidhi (rahimahullah) actually equates several years of companionship today!

2. Imam Hannad’s dedication to ‘ibadah is remarkable. Despite his specialisation being the noble field of Hadith, he was an embodiment of ‘amal (practice) too.

3. Sometimes, when being over-particular about formalities, we tend to lose focus of the realities…

4. One should spend more time in the masjid engaging in individual worship, over and above the congregational prayers.

5. One very important lesson from the above, is the habit of praising one’s seniors for what they deserve. Imam Tirmidhi (rahimahullah) did not shy away from saying the above about his Shaykh (rahimahumallah).